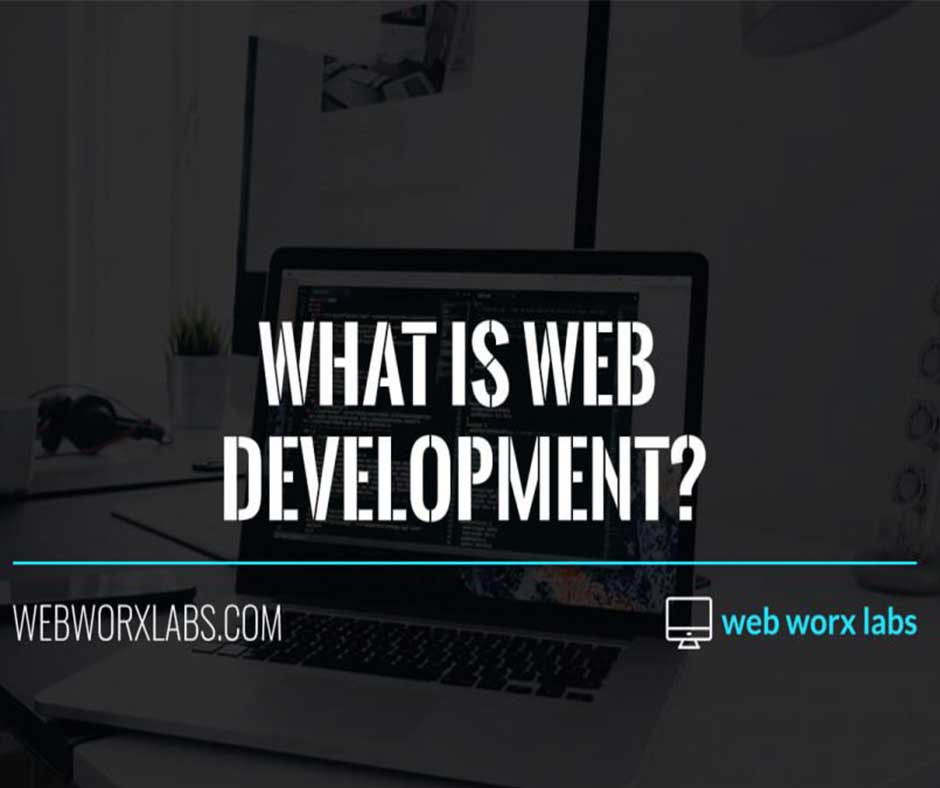 What is Web Development?

We’ve probably all heard the phrase, but do we all actually know what it means? Yes, we know it’s something to do with developing something on the internet, but most of us are probably just not sure what.

So in this article, we’re going to take you through some of the key concepts of Web Development to try and help you understand its many facets.

This skillset can be applied in both Information Technology companies or organizations or marketing organizations that lean towards the online side of things. In most established digital marketing firms that offer web development to help businesses establish or embellish their online presence. At Web Worx Labs, we are committed to providing this solution you can learn more about it in our About Us Section.

Here’s the quick answer so we’re not keeping you guessing, then we’ll go into more detail, as you’ll see it has many different arms to it.

What is Web Development? Web development encompasses an array of applications, community platforms, software, and business operations. Designed using computer languages, to facilitate and enhance the way we interact with websites, systems, and online applications. These are designed and coded by numerous types of Web Developers.

So, Web Development platforms and methods we’ll come to shortly, but what exactly does a web developer do – what are these ‘numerous types’?

What a Web Developer Does

A Web Developer has been trained to understand and manipulate one or more programming languages, they’ll design and ‘code’ using these languages to create a variety of web-based outcomes; a website, an online application, or web server processes that underpin and facilitate online web applications.

With this training, they’re able to create sometimes immensely complex online systems and applications designed to deliver some form of benefit to users and all manner of creative interfaces and formats.

The list of specific Web developer job roles is a long one, and it would be almost impossible for a single Web Developer to understand and fully master every Web computer program in existence.

When learning aspects of web development though, it’s not uncommon for a programmer to focus on one as a specialty, but they often, therefore, have an understanding of other applications either similar or related to their particular area.

It might make more sense if we show you the list, so here’s a list of the multi-level roles that Web developers can specialize in, in truth, there are probably more.

Within many of these, there are often further smaller branches stemming from that one profession. For example, Within ‘Web Developers’ as the main title, could also be specialists such as web engineers, web designers, web content development and more.

It’s fair to say, most of the web-based applications you’re likely to use on a daily basis, will at some point have been designed by a Web Developer. In fact, likely a team of Web Developers – and other developers too involved with the delivery of that application to you, developing platforms to use the application on, ways to store content produced by that application and so on.

To keep this simple, we can generally say that Web Developers fall into three main categories.

We’ve all perhaps heard of ‘User Interface’ (or known as UX for short). These are built and/or maintained by front end developers. Front end meaning the part of the web visible by general users.

Where Front end is involved in the visible parts, the back end – obviously is involved with everything that’s built behind the scenes, this is where the inner working are manipulated at the server end of the process which enables the front end to exist and operate smoothly.

This job title was coined by Facebook during an announcement, whereby they stated they were looking for more ‘Full Stack’ Developers. This is really just a fancy way of saying a web developer who understands both the front end and the back end of web sites or web applications.

The list is probably far to long to add here, but as a taster, we’ve added some of the more popular areas that really would not have existed, or evolved, if it were not for Web Development and the work of Web Developers. We’ve also added some examples to give it some context.

Since the internet was first designed there has always existed Web Programming Languages. They’ve obviously evolved dramatically over the decades, but nonetheless, they’re still required for creating a website or web application, and probably will be evolving right up to the point that AI will do it for us – well it’s likely!

It’s also likely you’ve heard of some of these web applications, perhaps you didn’t quite understand what they meant, or did exactly, but you perhaps knew they were ‘something to do with the web’.

Let’s see how many you recognize from the list of Web Development Languages listed below. It’s a quickfire list and then we’ll give some details on each of them.

Quickfire List of the Most Popular Languages Used in Web Development.

Here’s a list of the most popular Web Development programs. Amongst the thousands that are out there this is considered the top 20 list, gathered by github.info. Along with the date in which they first appeared.

Up and Coming Web Development Languages

From this list, in particular, there are a few notable names which should be given special mention. Swift was recently adopted by Apple for the programming of their iOS applications. This has led to a large rise in Web Development using this language.

Also worth mentioning Rust as an emerging language, gaining popularity for System Programming.

However, in terms of popularity, it’s easy to get caught up in the latest new programming language, but in fact, for Web Developers, there have been some languages that have stood the test of time.

Those that were popular even up to 30 years ago are still popular today. Names Like JavaScript, Ruby, Python, CSS, and PHP have been around for a long time and are still widely used.

A popular method for combining many of these languages into a more simplified user interface. And that can create many aspects of a website within a framework are called CMS (Content Management Systems)

A CMS is a software application bringing together of a number of Web Development Languages into a single platform that enables users to publish and edit content on almost any user device., and generally quicker to use than programming an entire site just by using Web Development Coding. Of the almost 2 Billion Websites online at the current time, most of those are built using a CMS.

Let’s take a look at the three most popular types of CMS available as there are currently 540 CMS platforms available, ranging in market share from less than 0.01% through to 60%. So before you start considering building the next WordPress, spare a thought for the hundreds who are already trying that.

Some of the other CMS platforms you have almost certainly heard of. Some are geared toward a specific type of ‘Website Task’, Whilst others offer and huge depth of possibilities for whatever you want to achieve.

“There are currently 540 CMS platforms available”

Let’s go over the few main market shareholder here, as they’re probably the ones that really matter. If you’re one of the minorities who don’t use the top option (WordPress) Then let us know in the comments below which CMS you do use – and why!

WordPress is a completely free CMS. Since it appeared in 2003, WordPress has for a long time established itself as the market leader- by some way! Most estimates put WordPress in the region of 50% – 60% market share, which makes this CMS the Giant among CMS systems right now, and we can’t really see that slowing up much in the short to medium term.

Figures will vary depending on which source you go to, but fair to say it’s a large chunk. This is the stats according to W3Techs.

In fact, at Web Worx Labs – most of our websites we have developed are using this platform given its open source community and ease of scalability.

A similar, if a more modular version of WordPress, this platform is also free, and still boasts a wealth of plugins, modules, and templates

Another free platform very similar to Joomla as it’s modular and theme based and all aspects of this can be swapped around. Again there are a lot of resources for this platform, it currently sits as the third most popular.

Are Web Developers in High Demand

The requirement for Web Developers is set to increase up to 2022 by an estimated 20%. So, we can safely say Web Developers are certainly in demand and growth, and with so many areas to explore and work in it’s going to be a popular choice of career for many.

How to Learn Web Development

An easy to follow, online course for Full Stack – Front End to Back End Web Development.

Modern JavaScript From the Beginning

A Comprehensive course which only requires some Basic CSS and Basic HTML Knowledge to start.

Or Call the Web Development Experts

Perhaps a better alternative is to give us a call, here at 647 829 9422 we’ve spent years developing Websites and bespoke custom applications for most types of platform. It’s free to call or email us, so regardless of what your knowledge level is on Web Development – call us now!

We really hope this has provided you with something of a useful overview to Web Development, developing for the Internet and building your general knowledge about Languages and CMS Platforms.

Want to be a Web Developer? Let us know in the comments below why you’re choosing – or have chosen the profession, or maybe why you chose to leave the job! Or maybe tell us what platforms you’ve used and maybe send us some of your work too.

Is Shopify a Hosting Site? Shopify, an all in one CMS for a subscription-based e-commerce store. Main features are easy signup, quick set up, support, and a simple user interface for maintaining and selling from an e-store. The focus is mainly on displaying goods for sale and facilitating transactions. However, along with that does come sufficient hosting for the site

Web Worx Labs Inc. is a full digital marketing agency. We specialize in the development, marketing, and analytics of small and medium-sized businesses. We truly believe and take pride in taking a partnership approach with all our clients. Call us today to get a beautiful design backed by strong insights to help your business reach new heights!